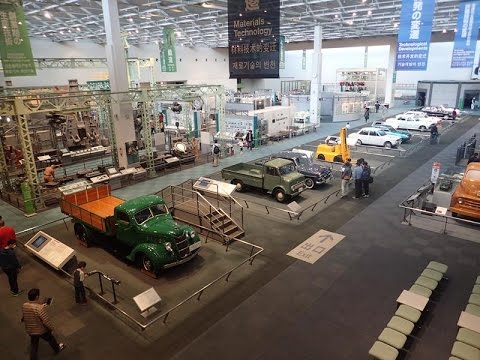 Industrial Dance is a both a style of music and dance. The term “Industrial Dance” is a North American phrase which derives from Electric Body Music (EBM). It is a sub genre of Industrial music which, as opposed to 1970’s-1980’s experimental electronic rock music, is focused on a dance rhythm. The terms “Industrial” to describe music relates to music that was a part of Industrial Records, a record label. There was an album released called: Industrial music for industrial people. It was a musical movement that was a music spin on punk, more rebellious than the traditional mainstream rebellion. There were heavy uses of totalitarianism in imagery, songs and performances. Some early bands in this genre include Throbbing Gristle, Einst?�A�rzende Neubauten and SPK.
As time progressed, the music in this movement began to include more of a danceable beat. One influential band in this transition was Front 242. Their music was somewhat dance-able while still maintaining the darker themes, they used electronic elements more heavily and it was less experimental in terms of instrument choices. Over time other bands ventured into this realm of Industrial Dance and were commonly labeled as Electro-Industrial. These bands include Wumpscut, Leather Strip, Skinny Puppy and others. This movement was in the early 1990’s in Europe and somewhat in America.
Over time, in the later 1990’s to early 2000’s bands like Funker Vogt, Terrorfakt, Hocico and Accessory came to be. They were more beat focused and driven. This was a shift from experimental jazz-like music from the 1970’s because it was less oriented around live performances and more oriented around body beats. As the early 2000’s to mid 2000’s came about, bands such as Combichrist emerged. They were even considered to be by some a new genre, harsh-EBM.
While the styles of changed, rave oriented influences started to enter the genre and in the late 2000’s and early 2010’s we find bands like FGFC820, [X-RX], Aesthetic Perfection, Faderhead, T3RR0R 3RR0R and more. While not every song these bands make fall into the Industrial Dance category, they have become what it is mostly these days.
As for the dance style, this is a difficult subject to research. Some would point to articles that emerged in early 2000’s on how to dance like a rivethead. Some people point to LA, Chicago or Germany for the dance style itself. Most noticeably the dance style has become popularized by YouTube. Back in 2006 a video was uploaded to the song War by Wumpscut which included someone wearing a gas mask dancing in their parent’s house. From there different videos were released which actually include a slightly different dance style but are called Industrial Dance.
There are many popular industrial dancers today as industrial dance videos have become a form of user generated content/ fan video Types Of Business Services Introduction for creative industrial music fans. Some popular dancers on YouTube include: tank9, dtoksick, Eisschrei, xxxaleeraxxx, and others.
The dance style is composed primarily of punches, kicks, martial arts movements, twirling of arms, sharp fast movements, clearing and making space for oneself. It is not a dance style that you do with a partner unless Service Industry Examples in synchronization with them. There are actually festivals in Germany about industrial dance and there are competitions on stage such as in Essen. It is an energetic, militant and at times hypnotic style of dance.
Industrial Dance has gained such popularity in recent times that it has been featured in Adult Swim, articles in magazines and also countless parody videos changing the music to something totally unrelated. Make sure to check out industrial dance more at Amphi fest, the Essen Original or simply on YouTube.

See also  How To Protect Your Company With Industrial Shredding Equipment

May 14, 2021 by Suzana Mikolova Service Industries